Skip to Main Content
It looks like you're using Internet Explorer 11 or older. This website works best with modern browsers such as the latest versions of Chrome, Firefox, Safari, and Edge. If you continue with this browser, you may see unexpected results.

A special e-bikes offer from Volt 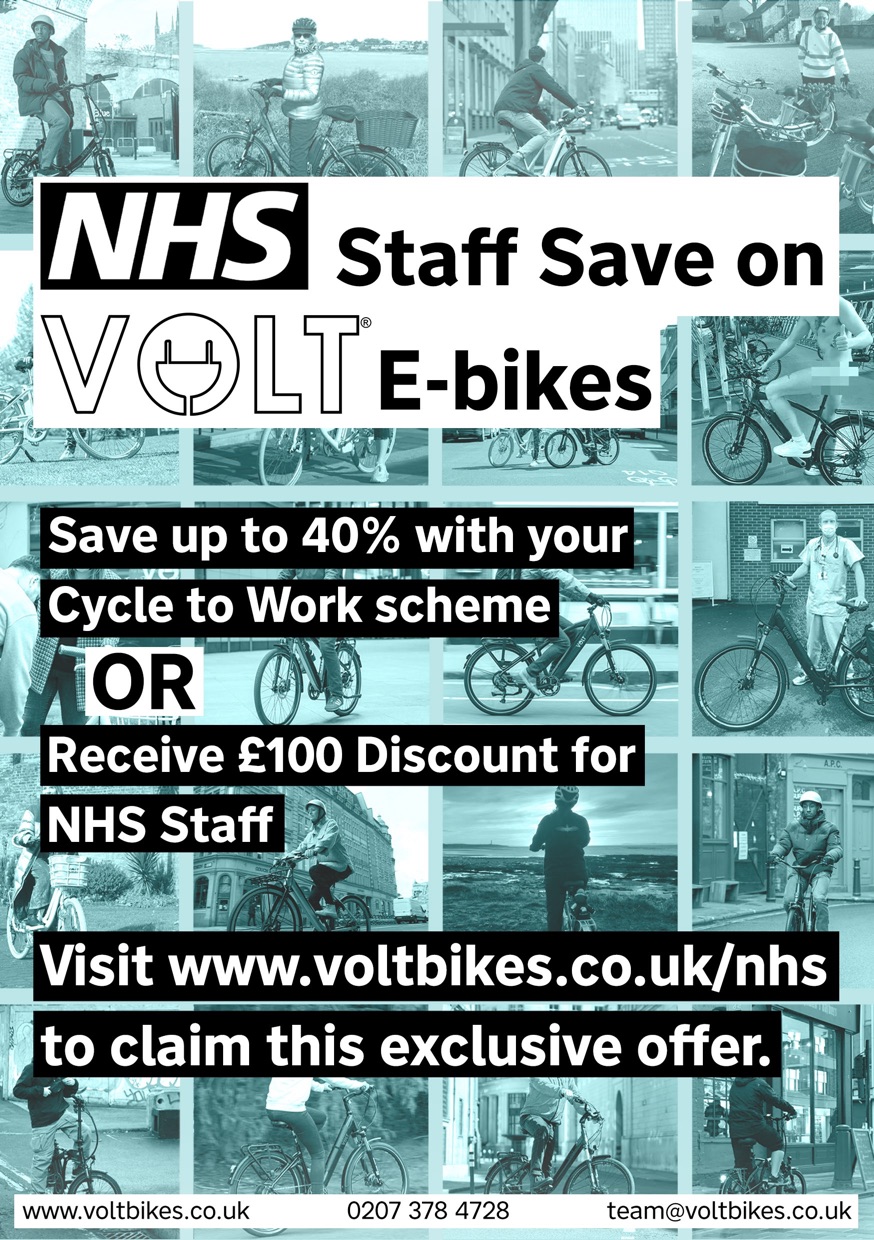 Watch our Active Travel webinar, part of our Clean Air Day celebrations on 16/6/22

On Clean Air Day 2022, we pulled out all the stops, with information stands at Newham: 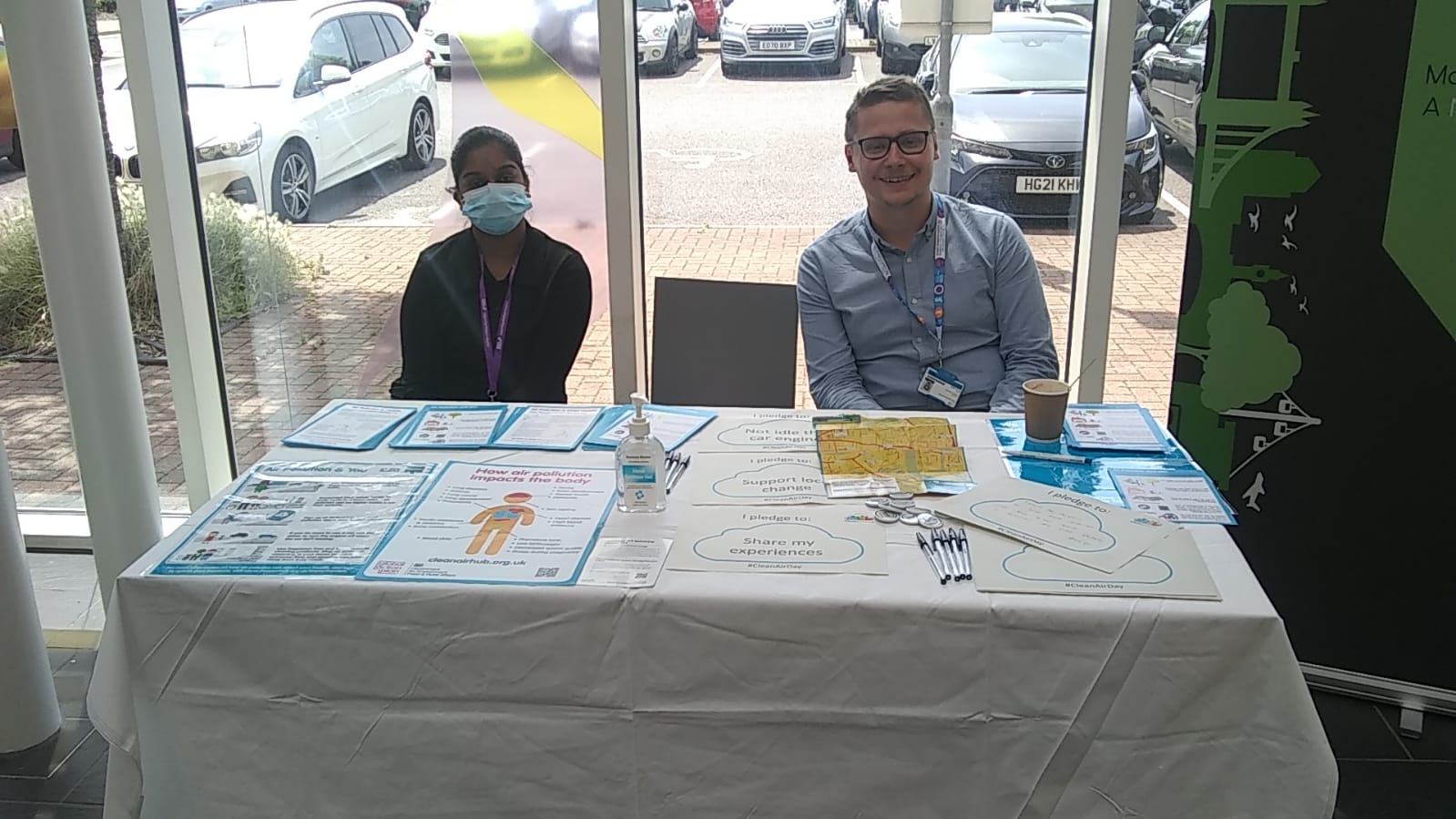 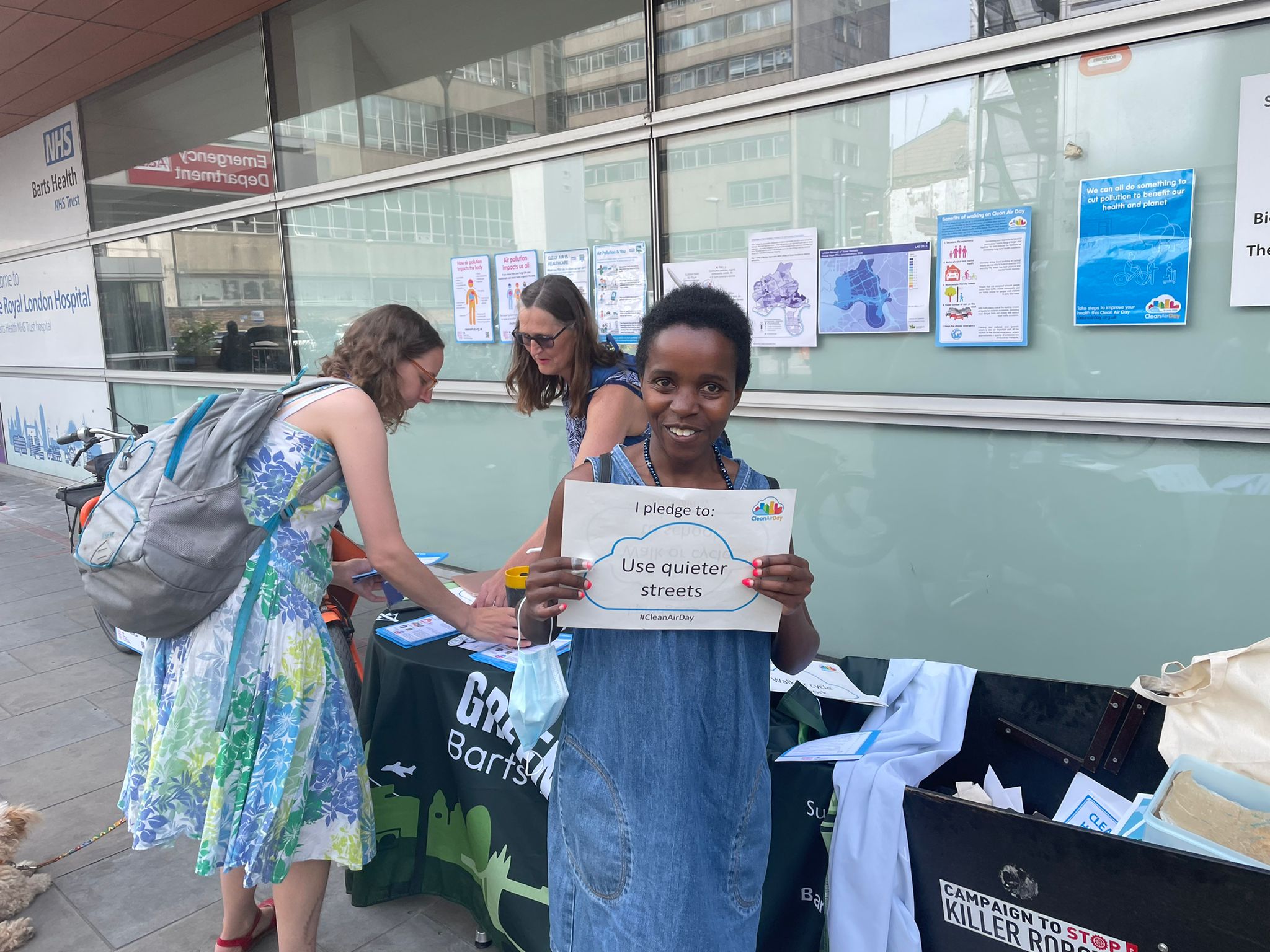 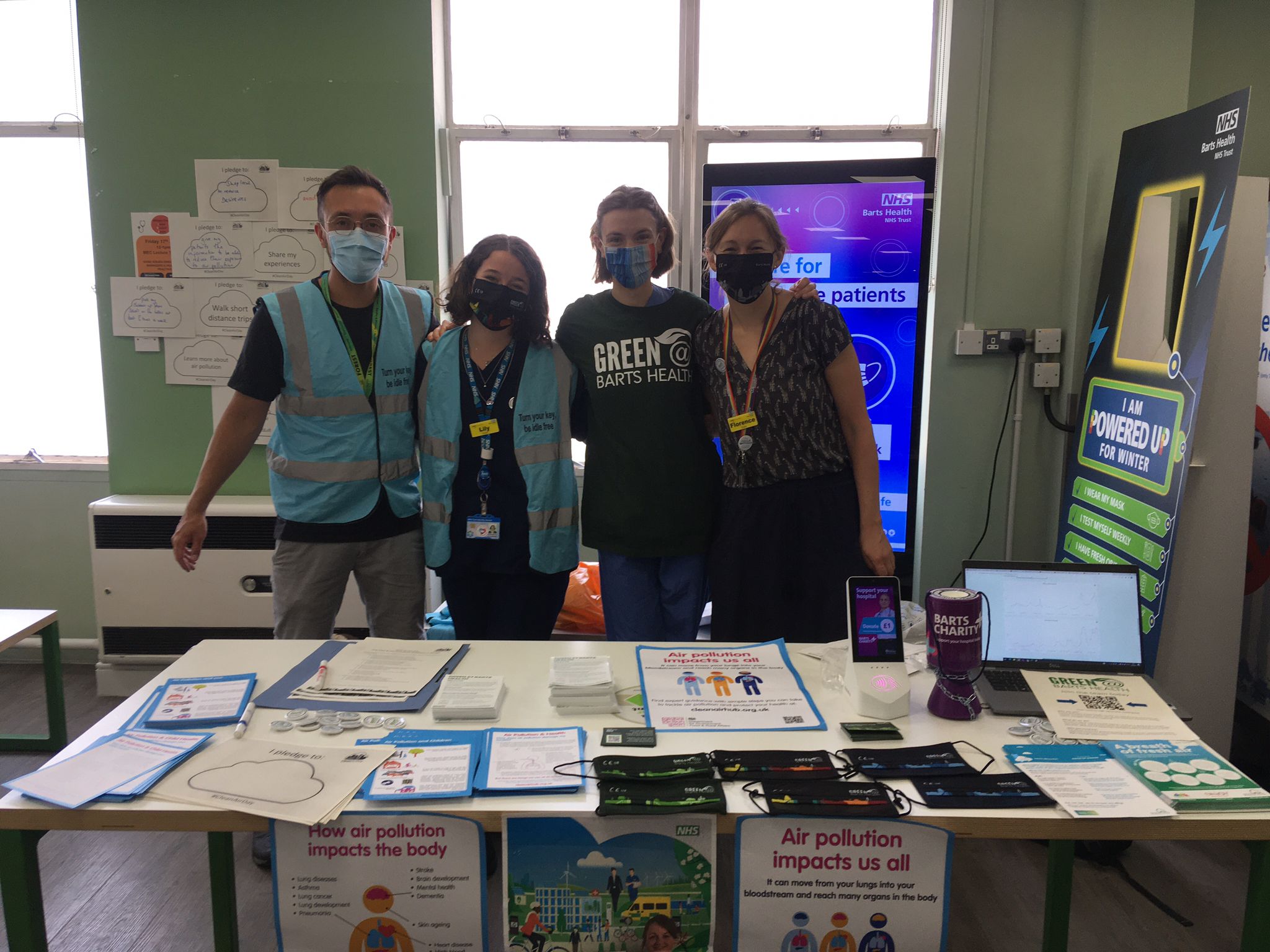 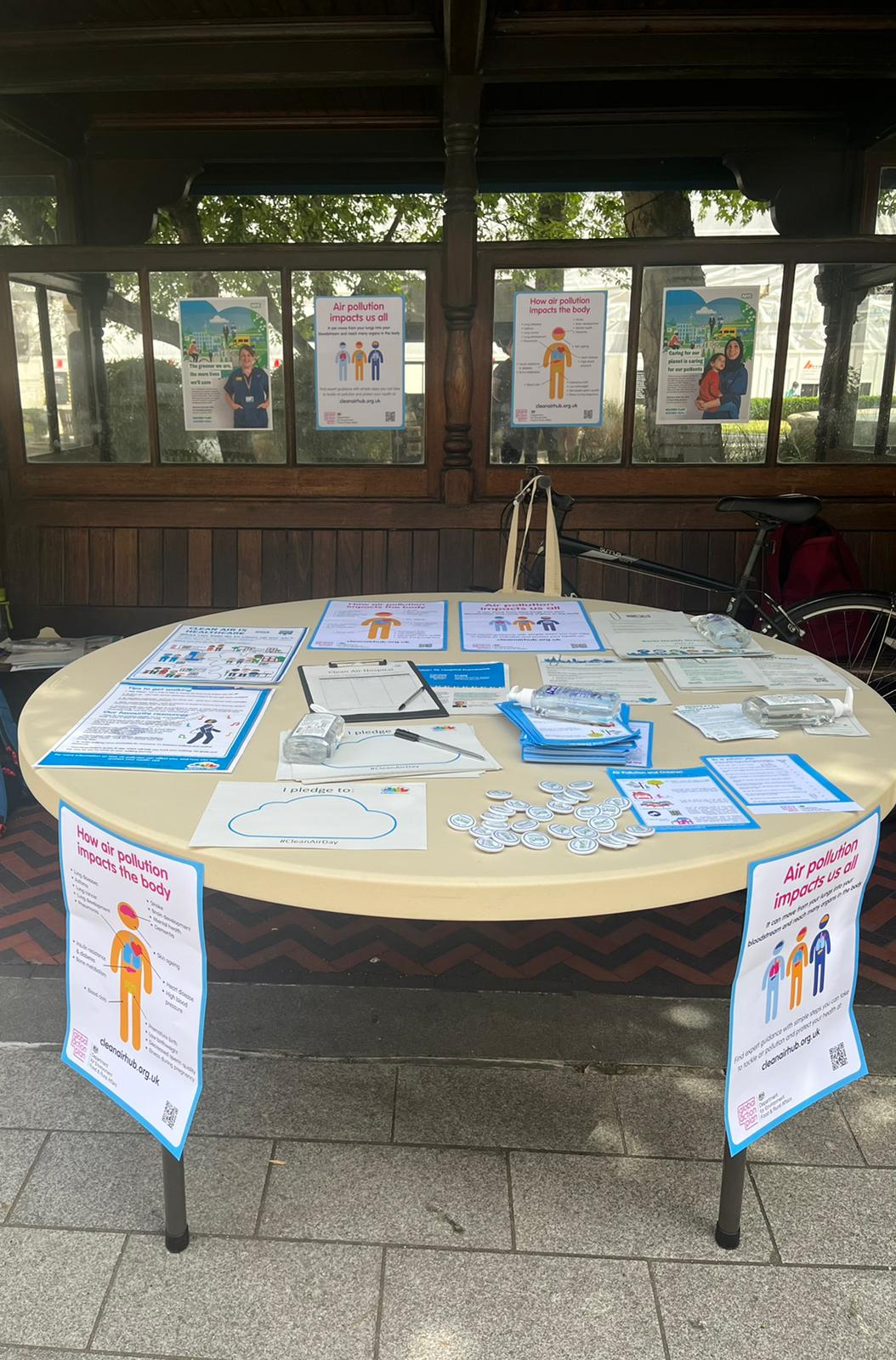 It was great to see Barts Health's first electric car for patient transport at RLH too: 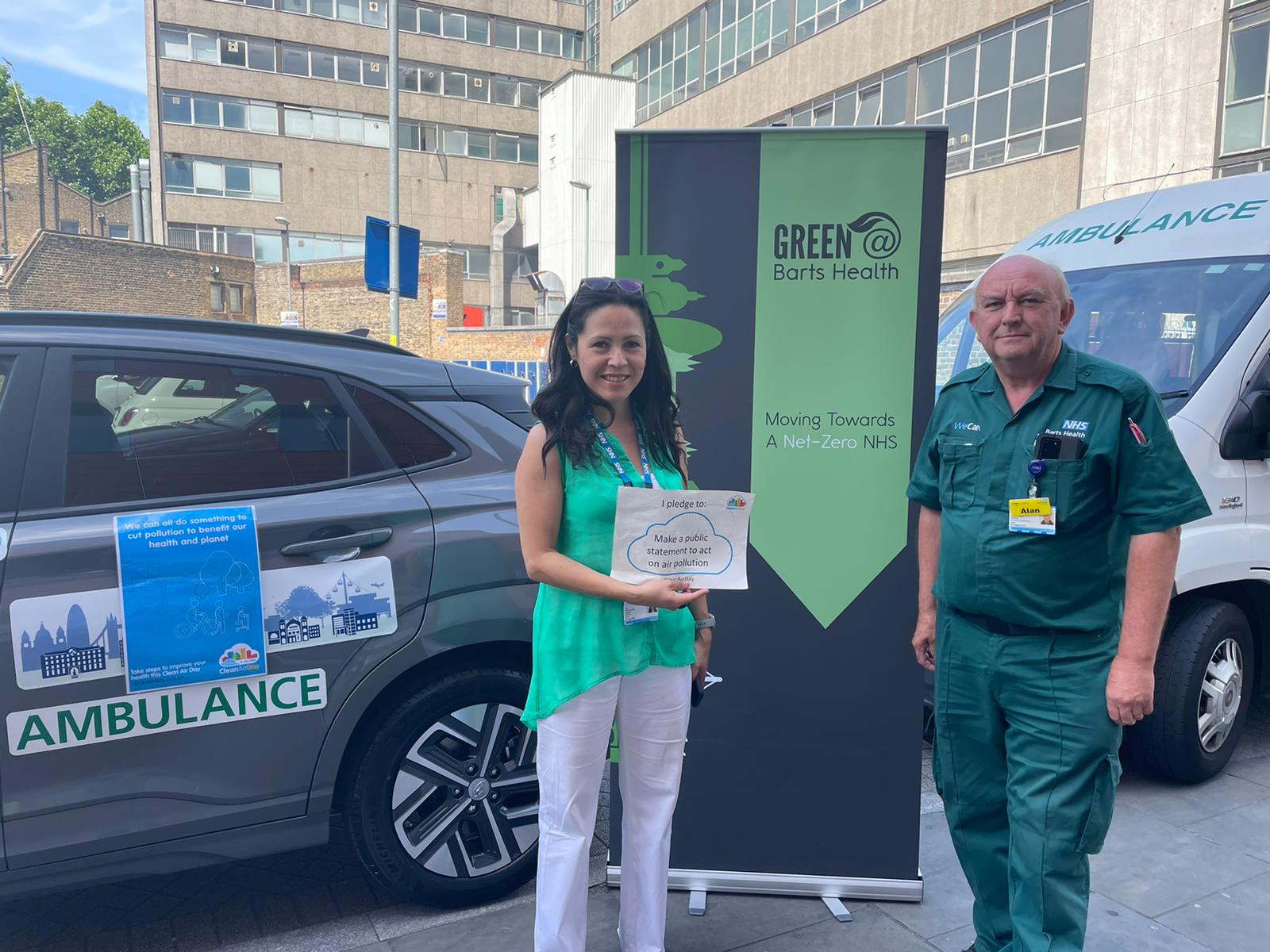 Finally, we met for a webinar about the benefits of Active Travel for both physical and mental health and wellbeing (spoiler – it’s very, very good for both), some of the barriers and challenges that we may face, and ways to overcome them. Our panel of experts shared their experiences and provided guidance, including: Cycling Superhero Kamar Omar, (@auntiekay28) on twitter Hirra Khan-Adeogun, head of Car Free Cities at Possible Ruth-Anna MacQueen, consultant obstetrician and founder of the Family Cycling Group on Facebook Ruquyya Vankad, Muslim Chaplain at Whipps Cross Zoe Portlock, co-CEO of Bikeworks CIC Jonathan Kelly, general manager at Barts and active travel researcher Emma Richards, co-chair of the Barts Health Women’s Network, and Paulette Edwards participants in our Car Free June Challenge plus other guests! Watch the webinar below:

Have a car-free June... get 2 weeks free Brompton hire to help! 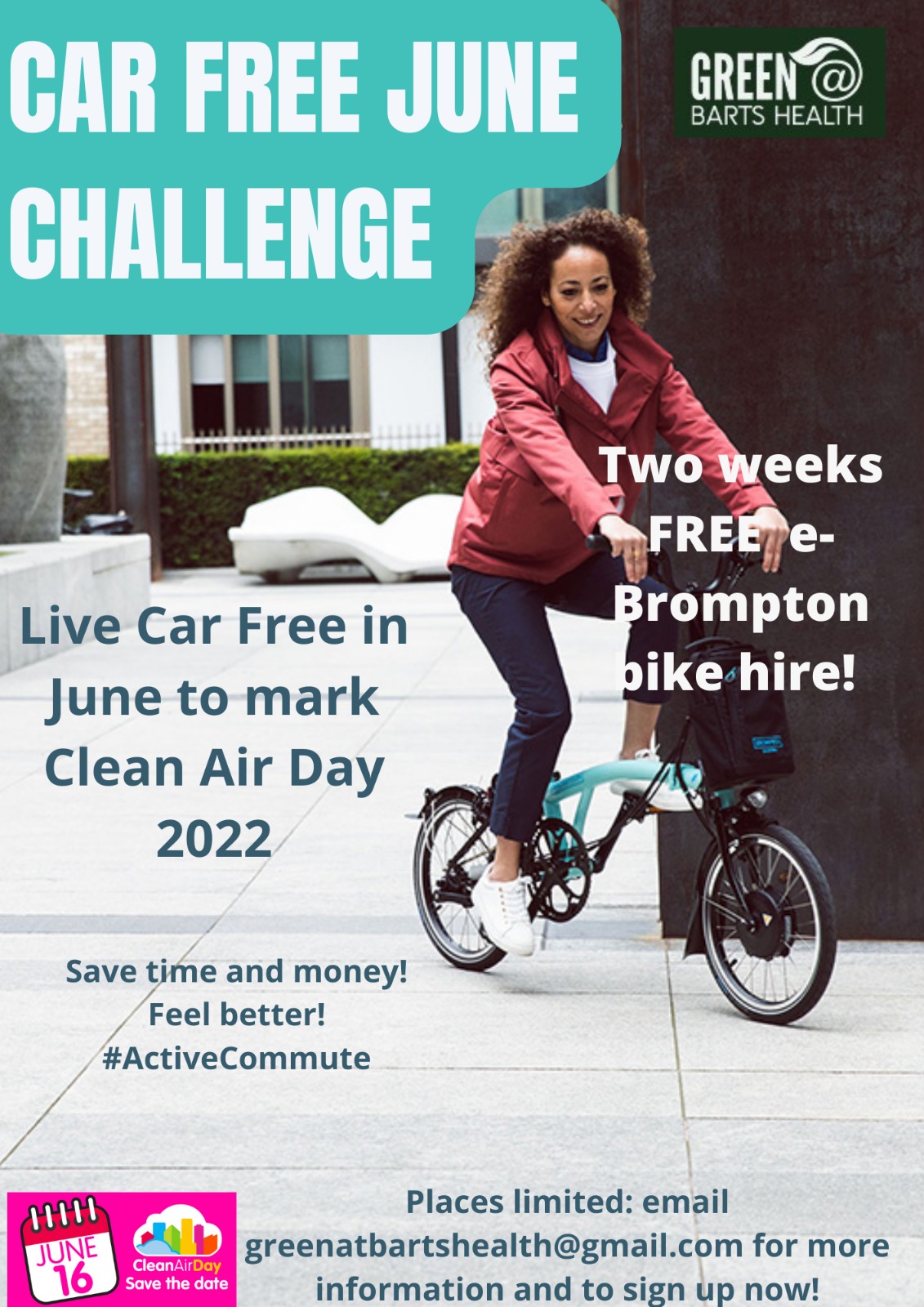 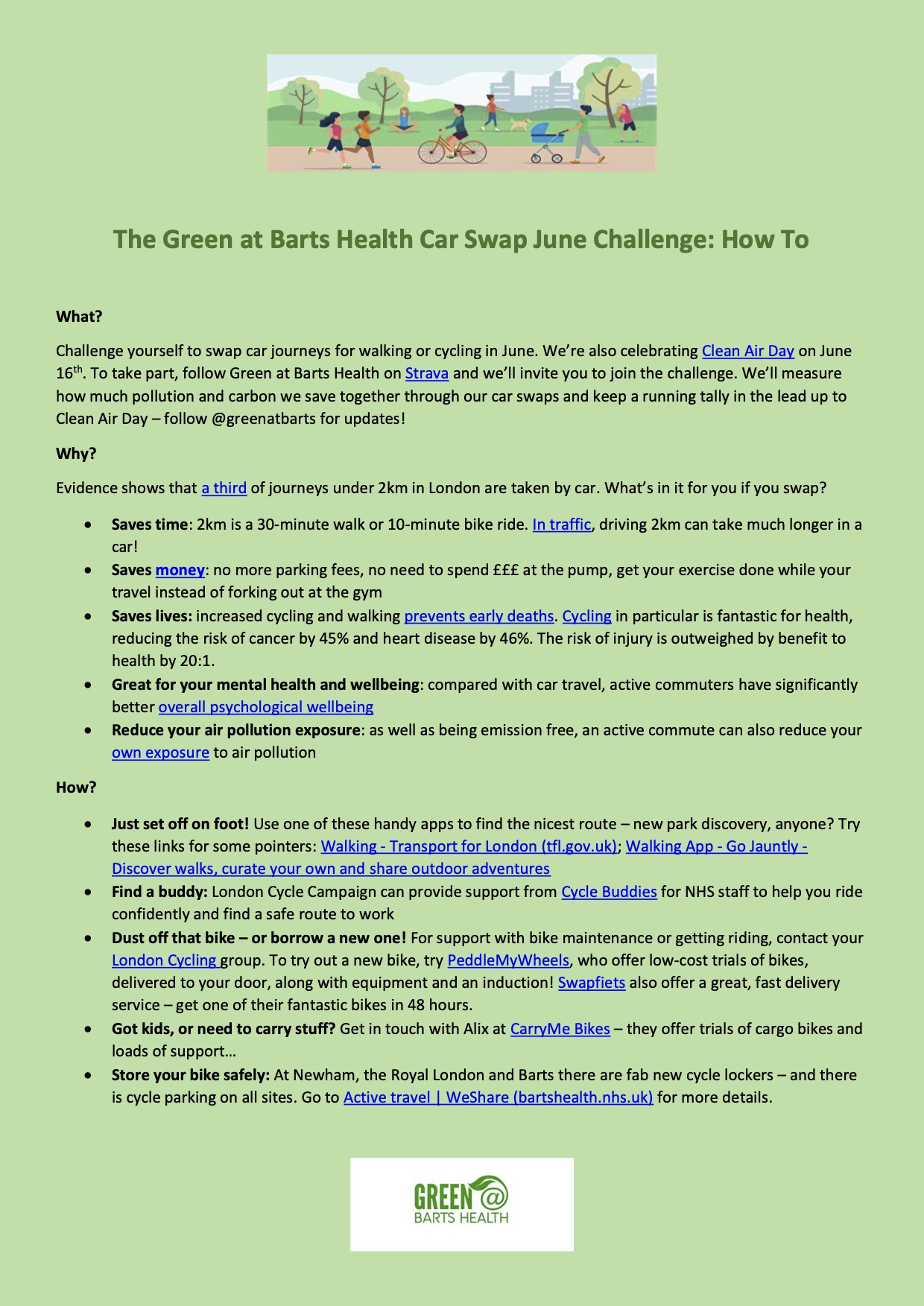 New protected bike park at RLH on its way!

The RLH Staff Wellbeing teams recentl teased the opening of a new protected bike park for staff at RLH.

Watch this space for more news and how to use the park... 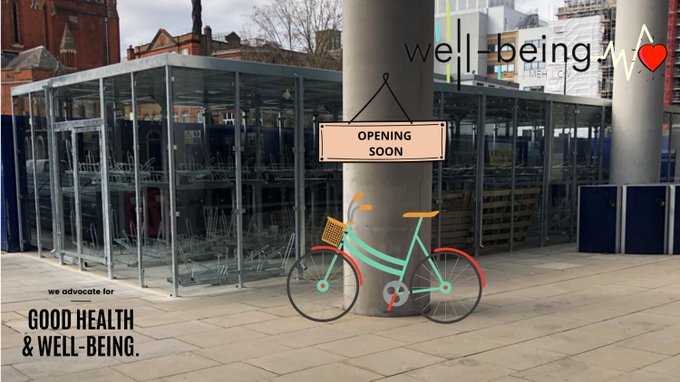 Cycle Buddies in the NHS 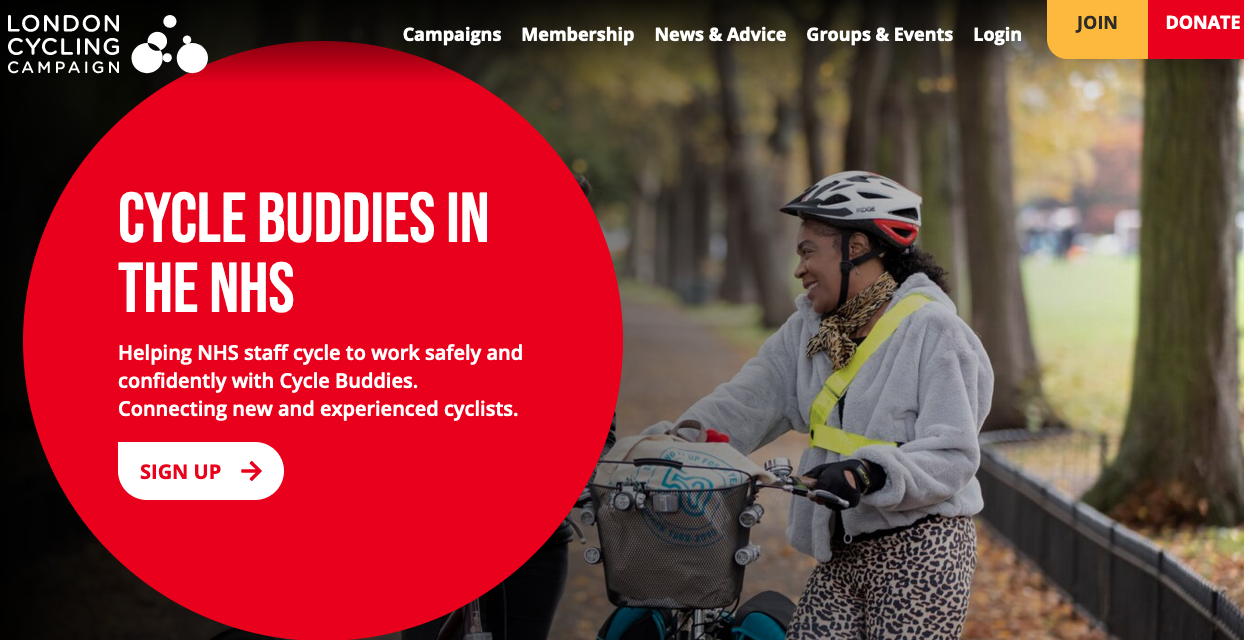 the NHS has committed to net zero non-emergency patient transport. If you'd like to follow that lead and get to-and-from work in a net zero way then there's a huge body of evidence on the health and environmental benefits of cycling, here's a selection:

Promoting cycling can save lives and advance health across Europe through improved air quality and increased physical activity. World Health Organization (WHO); 2021.
On World Bicycle Day on 3 June. The WHO calls countries to acknowledge cycling as an equal mode of transport and to double the level of cycling by 2030. The Pan-European Master Plan for Cycling Promotion provides a set of recommendations to reallocate space for cycling and walking, improve active mobility infrastructure, increase cyclist and pedestrian safety to reduce fatalities, develop national cycling policies, and integrate cycling into health policies and urban and transport planning...

Cyclists 'exposed to less air pollution than drivers' on busy routes. The Guardian; 2018.
This article shows people in cars and buses spend longer in toxic air, as do walkers on main roads...

But take it from trusted colleagues who started to cycle recently...

How long have you been cycling?

"Since June, when the Wheels for Heroes scheme was running."

Why did you decide to get a bike?

"I saw a fellow nurse with her bike. I knew that she was new to cycling, which made me think hmmm, maybe I could do that. When you see other people taking it up it becomes more achievable, where before I thought cycling was only for MAMLs and mad people – cycling in London is painted as really scary. But my friend seemed to have all her limbs attached still, and be quite enjoying it so I thought I should give it a go!"

When do you use your bike?

"I started just using the Brompton – doing mixed commute on the train and then bike from Stratford. But then we got our bikes out of the shed at home, which hadn’t been used very often, and started going on rides in the countryside where I live. Essex is ideal because it’s flat - I’m rediscovering where I live, and there’s some really cool stuff really locally. Initially I rode on the Brompton, but now I’ve bought a whizzy, carbon forked roadbike, with an alloy frame. It’s so sleek, it weighs less than 10 kg, I’m still slightly scared of it! I’ve also bought my own Brompton through the cycle to work scheme and used the money that I saved on my underground my season ticket for my road bike. I love both my bikes – they’re just very joyous and fun!"

What would you say if I took your bike away from you now?

"I’d be very sad. It makes coming to work great – it clears your head, and now I enjoy travelling, even through East London! I don’t want to go back to smelling someone’s armpit on the central line…. I just keen thinking why did we not do this before?"

Do you feel different since you started cycling?

"Yes, I’m not worrying about going to the gym after work as I’m getting my exercise this way – it’s built into my day. And now I can also eat more doughnuts! I’m also using the car less - now I go to the shops on my bike where I would previously just have got in the car. My bike’s in the hallway ready to go!"

... and here's how Gary Hope, clinical skills tutor and ODP, feels about it:

How long have you been cycling?

"Since June, though I used to ride when I was younger."

Why did you decide to get a bike?

"I wasn’t happy about getting on the underground because of Covid, so initially I switched to taking the bus. Then I started walking, but it took hours to get to work. Then I thought I could get a bike, because there are two benefits – to the environment, and to my own health. Rachel was also getting a bike, and initially we were going to sign up together, but I wanted to choose my own colour so I went straight to a shop, which gave me a discount for working in the NHS. I feel quite smug now - on the way to work, which used to take me 45 minutes to an hour, now I can be at work in 25 minutes from home!"

When do you use your bike?

"I use it for commuting, and at weekends I go out on trips. The first time I cycled to Putney, which was a long way! I’ve stayed closer to home since then – last weekend I went to Hampstead. I’ve also used the train to get to further away places like Rye and Brighton – then cycle around there seeing the sights. My target is to cycle all the way to Brighton one day!"

What would you say if I took your bike away?

Do you feel different since you started cycling?

"I feel healthier – it feels like I’m cheating because I don’t have to go to the gym! I’ve got more energy, and I’ve explored loads more than I would have done before I got the bike. Routes that I previously wouldn’t have thought about, like going to Epping Forest, Canary Wharf, down along the river. I’ve got rid of my car – I wasn’t using it anyway, but now I know I don’t need it. I think the reason that changed was because I’ve got the Brompton now – previously one of the limitations was secure cycle parking at work. But now the Brompton just comes down into the education centre with me!"

Bike been stolen? You could get another from the NHS Bike Drive scheme!

"If you’ve had a bike stolen recently, here’s a chance to claim a bike from the NHS Bike Drive scheme.  Local charity ProBike CIC have had over 100 bikes gifted to them by the Metropolitan Police (and some private doners) which need to find a new owner.  Once you have identified a suitable bike, ProBike will arrange for it to be serviced and made roadworthy so you are back on the road again.

What you need to do

1.    Email Lawrence Mohammed at law@probikeservice.co.uk with the following information

If someone else if attending to collect a bike, they will need their contact details too

Please note, there is no guarantee that your preferences will be matched as it depends on what is available, but it will help ProBike come up with the best options.

2.    Get yourself to The next NHS Bike Drive giveaway event will be at Here East, just outside the Press Centre:

The postcode for Here East is: E20 3BS

The map location for the event is: https://what3words.com/party.pool.delay

·         All bikes gifted will have been assessed but will require bringing back to our workshop (or one of our supporting partner's workshops) for servicing in the near future AFTER the event.

o    labour costs are gifted by ourselves and our supporting partners

·         ProBike aim to fix the bikes ASAP but please bear in mind that cycling is the busiest it's ever been in the UK and parts are in huge shortage atm industry-wide so this may not be for a few weeks or months.  With this in mind, any staff struggling to get to work will be prioritised.  Please note that although ProBike will do their best to match up rider and bike, ultimately it’s a case of first come, first served.

There may be reporters from the Guardian and other publications present, along with photographers seeking to document the event.  If anyone DOES NOT wish to be filmed or photographed, please let me know and await confirmation of acknowledgement.”

The Cycle Scheme webinar on 8th July 2021 covered everything you need to know about the Cycle Scheme and how it benefits to you! The webinar was recorded, to view it please contact Tanvir Hasan, Salary Sacrifice & Systems Support Officer, at tanvir.hasan@nhs.net or 0203 594 6609. Ext: 48034. 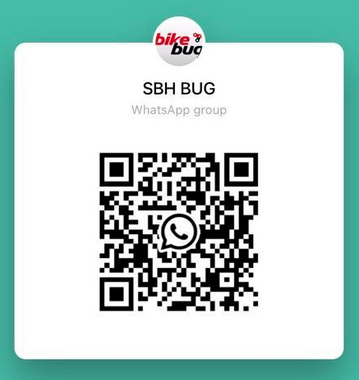 how to get a cycle locker

As reported on the Trust's external website, "there is a waiting list for the 40 green, personal, cycle lockers located around the [Newham] site. If you wish to be added to this list, just email the sutainability team: bartshealth.sustainability@nhs.net"

Other Benefits and Offers for Cyclists

Green cycle offer (as shared by Louise Davis, Health and Wellbeing Assistant, on 6/5/21):

We are pleased to announce that as a Trust we have partnered with Green  Commute  Initiative who are an  industry-leading  cycle  to  work  scheme. They offer great deals  for  employees,  employers  and  bike  shops.  GCI’s  pioneering  scheme  was   the  ﬁrst  to have  no  £1,000 limit,  allowing  employers  to  set  their  own  scheme  limits, which in our case is up to £5000

As a UK tax payer you could save...

1. Get a price from one of GCI's registered resellers and submit a quote. You will need your employer’s GCI code which you can find in the box above.

3. When GCI receives your signed documents, the electronic Collection Voucher will be sent to you. When you are ready to collect your new bike, take the voucher to the bike shop and if you are happy, please give the bike shop the PIN code from the voucher.

4. Since your employer has paid GCI for the voucher, you’ll need to reimburse them. Your employer will reduce your gross (before tax) pay by the value of the voucher. This is called salary sacriﬁce and it means you don’t pay tax and NI on the amount of salary you sacriﬁce. Depending on your tax rate, you’ll save either 32%, 42% or 47% on the cost of the package.

6. Due to HMRC rules GCI must hire the bike to you. The Hire Agreements are always for three months. After that, GCI will write to you and offer you a free-of-charge loan of everything for a further 5 years and 9 months which takes the bike to 6 years old. This means you continue to benefit from the tax break with no penalties from HMRC.

After the loan period, you can buy the bike from GCI for £1. The £1 charge is so that GCI can demonstrate to HMRC when the transfer of ownership took place which protects you from any tax claim from them. In practice, the bike is yours from day one." 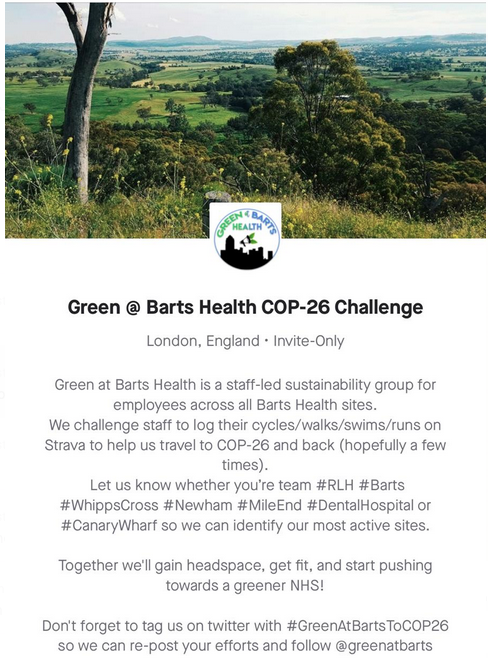 Hosted and maintained by Barts Health Knowledge and Library Services.

Banner image: "Warming Stripes for England from 1884-2020" from https://showyourstripes.info.